News today of Pope Benedict's stepping down just reached me and I am deeply saddened to be losing such an awesome Pope. He's the second pope to reign during my lifetime, but I've identified strongly with him since he has been the pope since my reversion to the faith (read more here). I also got to see him once while in Rome this past summer during one of his Wednesday sessions: 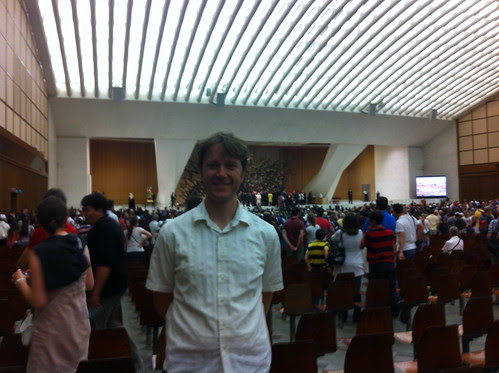 That's me with the pope in the background sitting on my left shoulder.

I totally understand his reasons for stepping down. He is much older than John Paul II when he passed away and the papal office is very demanding physically and spiritually. Although a pope stepping down is rare, it isn't without precedent. I also echo the thoughts of Fr. Dwight Longenecker.

I am very hopeful about the future of the Church and to whomever succeeds this pope. The list I was reading this morning looks pretty promising, especially if our very own Cardinal Tim Dolan of New York is somehow elected. I was also excited to see a Cardinal from Ghana, Cardinal Peter Kodwo Appiah Turkson, so high on the list. No matter what, I know for sure that the Holy Spirit is guiding the Church into all truth. God Bless you Pope Benedict for your service to the church and may God grant you peace in your final years.

p.s. - Also a big shout out to my friend Gabriel Blanchard who has just started his own blog (mudbloodcatholic.blogspot.com). I have really enjoyed his first few posts. He posts a lot more often than I do and is a much much deeper thinker than I so I highly recommend it.
Posted by Dan at 12:36 PM

Email ThisBlogThis!Share to TwitterShare to FacebookShare to Pinterest
Labels: Popes