Where to begin with this post. Caleb Stine is my favorite Baltimore artist. Actually, I think he's my favorite artist. Period. I know that's a pretty big statement but it's really true. He's a friend, a neighbor, and an excellent musician. He's a great human being and one of the friendliest guys you'll ever meet. He's made a number of records so far and I recommend ALL of them. You can get them from his website: calebstine.com. He's introduced us to so many great local and national artists. Chief among them are The Honey Dewdrops. We have built up quite the Caleb Library as this photo shows: 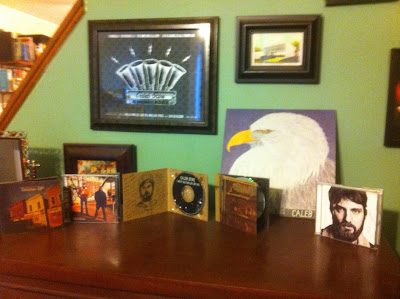 Anyway, to get to the point of why I mention this great Baltimore artist on this blog I'd like to discuss the christian and catholic themes in his music. Although Caleb himself isn't Catholic, I find some very beautiful Catholic themes in his music, especially his most recent album, "I Wasn't Built for a Life Like This". You can listen to the whole album on his website for free. The entire album is so beautiful and skillfully made. Very bare with just vocals and guitar on most tracks. The format really brings the lyrics and Caleb's guitar skills to the foreground.

One track in particular, the epic "When She Comes" is a song I could listen to on repeat for a while. The song itself is about preparing oneself for the woman of your dreams, which doesn't apply that much to my life since I've already found the woman of my dreams. However, there's a deeper meaning that I've found upon repeat listenings.

Here is the opening line: "Gotta get myself ready, make sure my heart is pure/set my motives in order, put my hope on things that endure." This itself is a meditation. A prayerful reorganization of thoughts and feelings. I've used these lines to help me prepare for Mass and for the reception of the holy Eucharist. To prepare oneself to receive the true body and blood of Jesus, one's heart and soul must be properly prepared.

The song also includes the lyrics, "Gotta listen to my soul, to the truth that's always known." Caleb has many lyrics about the subject of truth, and if you talk with him enough you realize how much he thinks about this topic. A certain Roman once said, "What is truth?" (John 18:38). The subject of truth is something that has been discussed and debated for centuries. There was one man in history who said, "I am the way and the truth and the life" (John 14:6). We also believe that found in the Catholic church is the fullness of truth. I think that's a beautiful statement, though I'm sure some would consider it arrogant. I think the reason for this claim can be summed up with St. Joan of Arc's statement, "About Jesus Christ and the Church, I simply know they're just one thing, and we shouldn't complicate the matter."

Then there's this line, "I'll be walking my path, back to where I'm from..." This one is another line that hits me strong because it acknowledges that there's something to our past and our home. It's the wise that realize that there's wisdom in the past. The people who lived before us were not just old out-of-date irrelevant thinkers, they were just like us and their thoughts and actions are things we can learn and build upon. Isaac Newton once said, "If I have seen further, it is by standing on the shoulders of giants."

Throughout the rest of the album there are even larger hints of religion and God. The song "God Once Raised a Son" is a great original gospel tune. It's absolutely beautiful and displays the deep faith of a woman who's lost her son in a coal mining accident. Then there's "The Eternal Present". I could probably discuss this song for days as well. This song contains the lyrics:
"I might look lost to all but God"
"I have much I must atone"
"I no longer can deny the truth that streams in through my eyes"
"How could I really lose when God's my only muse?"

I beg you dear reader to get your hands on this album. It's a true classic in my eyes.

Email ThisBlogThis!Share to TwitterShare to FacebookShare to Pinterest
Labels: Music